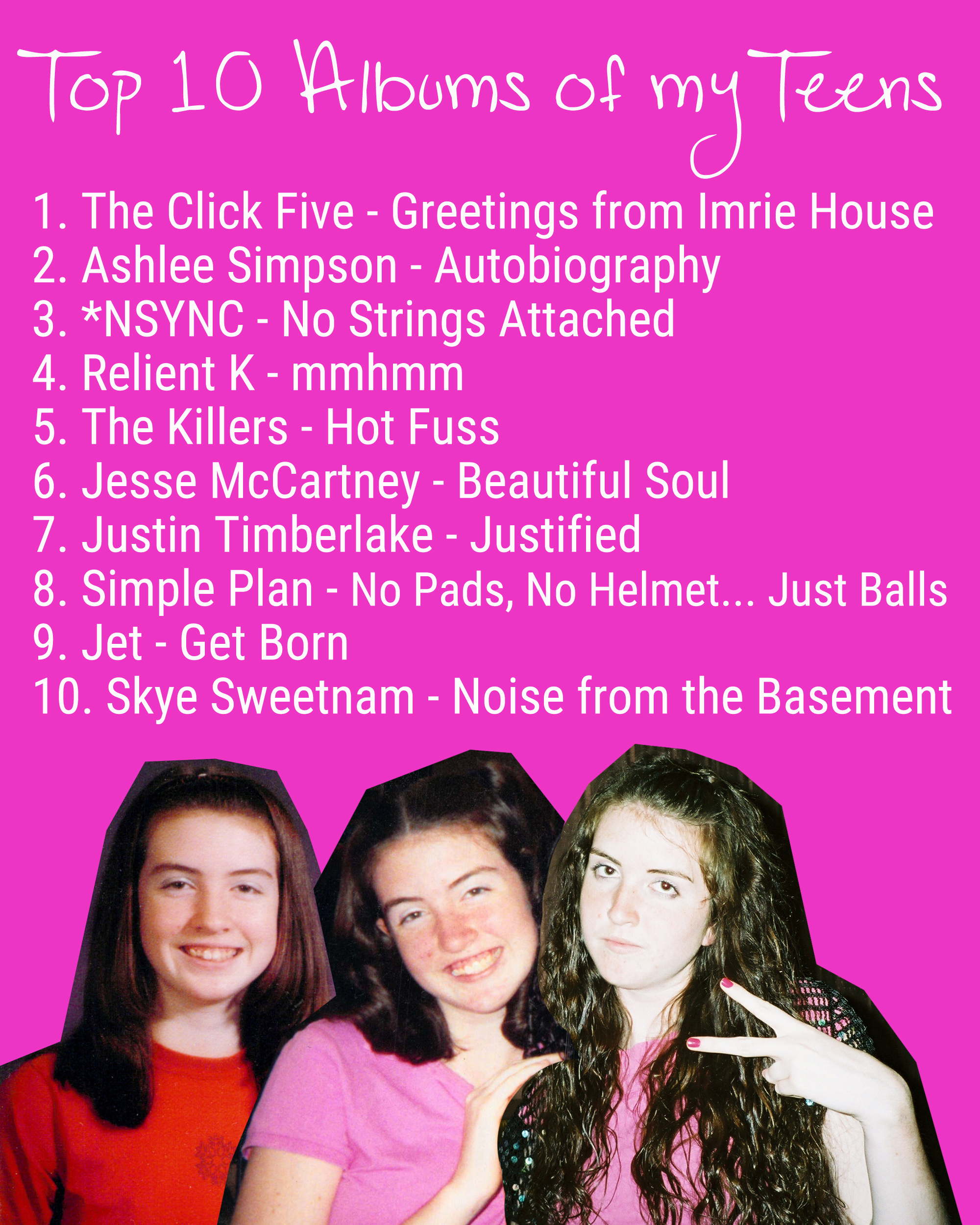 I’m sure you’ve seen this Top 10 Albums from your teen years list going around the internet. When it comes to music and nostalgia there is zero percent chance that I wont participate.

Coming up with my list was a struggle because most of my teen years I didn’t listen to entire albums! This was the dawn of the Napster + mix CD era, so I primarily listened to singles. I think anyone who knew me in my teens would agree that this is a solid representation of who I was as an emo around the edges teeny bopper. #stilltrue

Why did these albums make my list? I’m so glad you asked! Here’s a breakdown with more deets inside the mind of teenage Jess as the mind of 30 year old Jess remembers it. 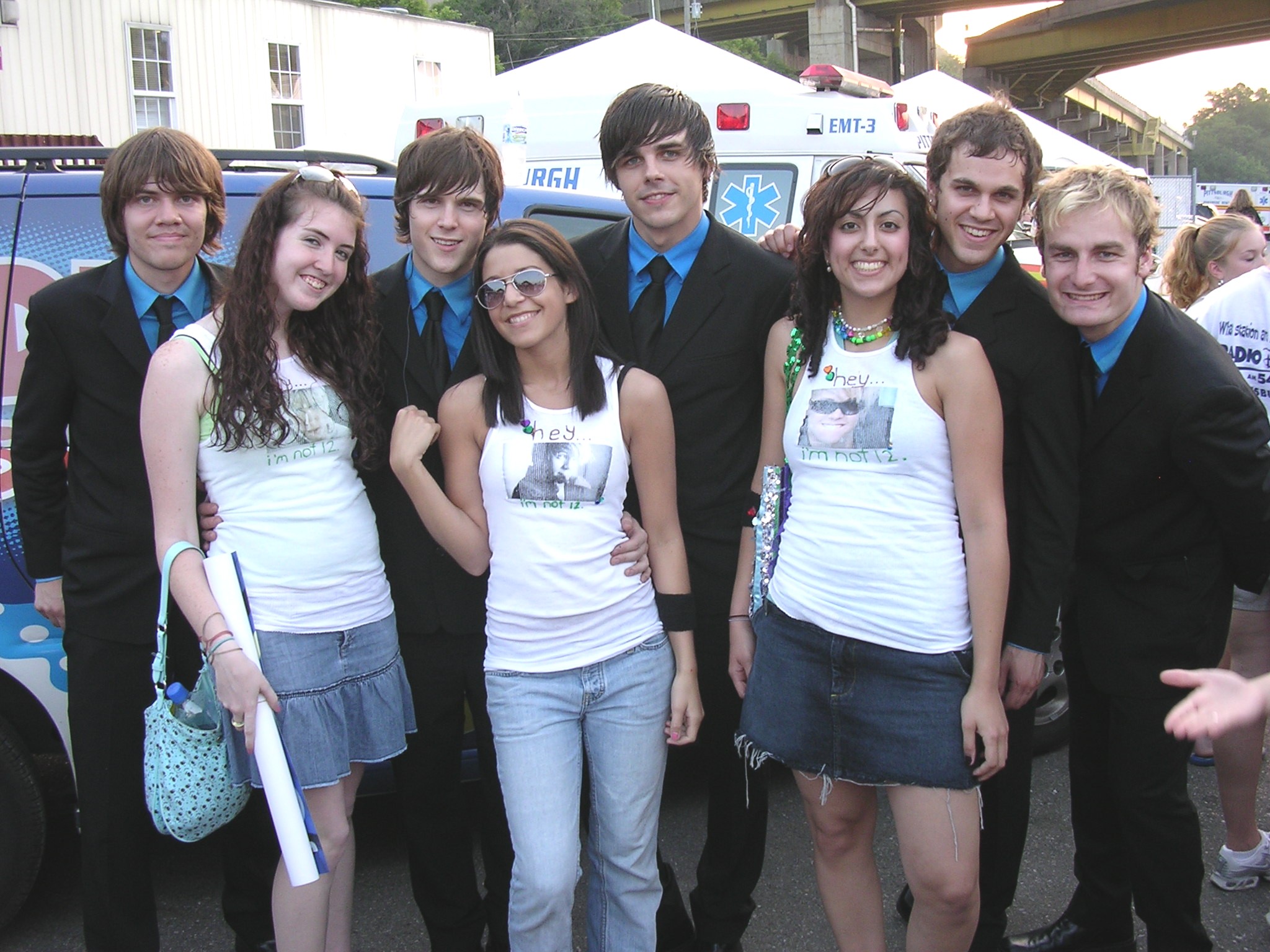 Y’all!  I can’t even get all my feels out about The Click Five. My senior year of high school into freshman year of college I was straight OBSESSED with them. The summer between senior and freshman year of college I think my friends and I saw them live 4 times in 2 months or something ridiculous. I need to do a full post on The Click Five sometime soon because, damn, it was bonkers and I have such a happy place in my heart for this time in my life. Do I still follow all of them on social media? Yes. If you have no clue who these dudes are you might remember their biggest hit, “Just the Girl“. 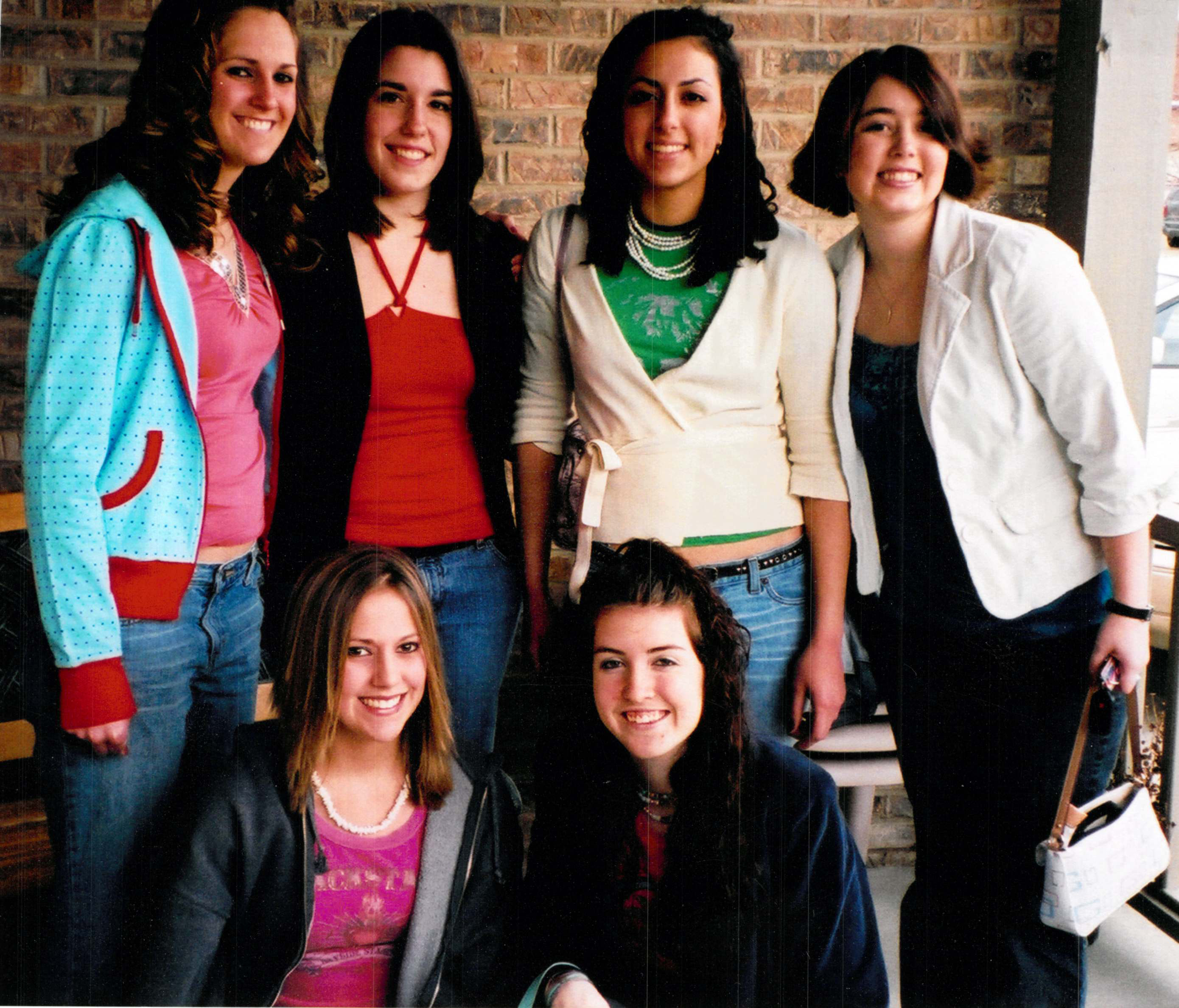 This photo is right before we all piled into my Chevy Lumina, Lela, and drove downtown for the Ashlee Simpson concert. (BTW this was the first time I discovered The Click Five, they were one of her openers!) I unapologetically still love this album. I loved the Ashlee Simpson show, she seemed so fun and spunky and just edgy enough for my rule following high school self. Honestly, the number of times I’ve copied Ashlee Simpson’s hair styles over the years should be embarrassing, but I just don’t give a fuck. My friends and I listened to this CD on repeat on the way to the Jersey Shore one summer. 17 year old bitter and single high school me really identified with these lyrics from Autobiography “right now I’m solo, but that will be changing eventually.” 😂 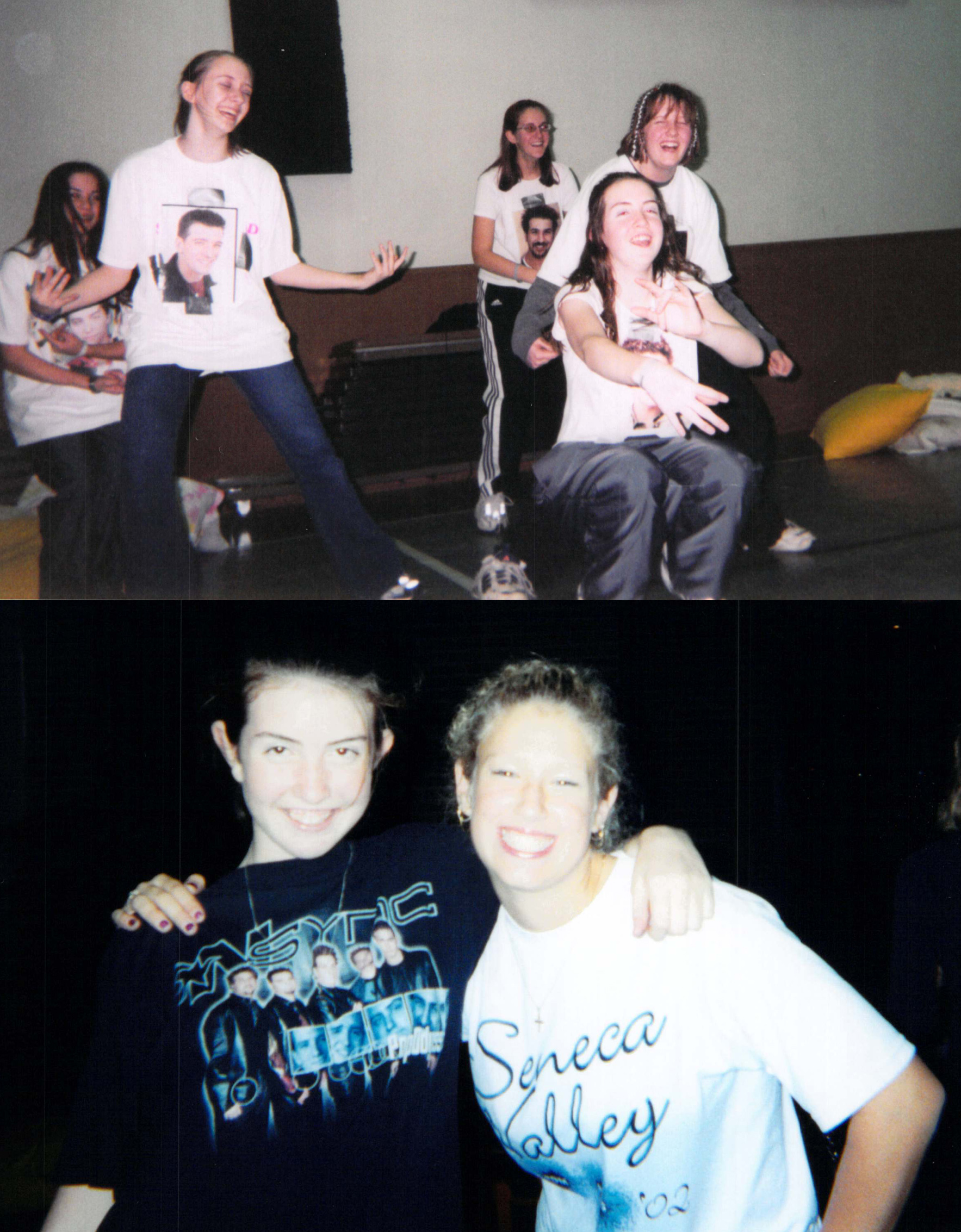 Obviously *NSYNC had to make the list. You can see more about my *NSYNC obsession in this previous post I wrote. No Strings Attached is the album that made me decidedly TEAM *NSYNC in the war between *NSYNC and Backstreet Boys. This was Justin Timberlake’s best hair phase IMHO. This album showed us that *NSYNC wasn’t going to continue to be taken advantage of by Lou Pearlman and taught middle schoolers everywhere about cyber sex. What more could you want?! 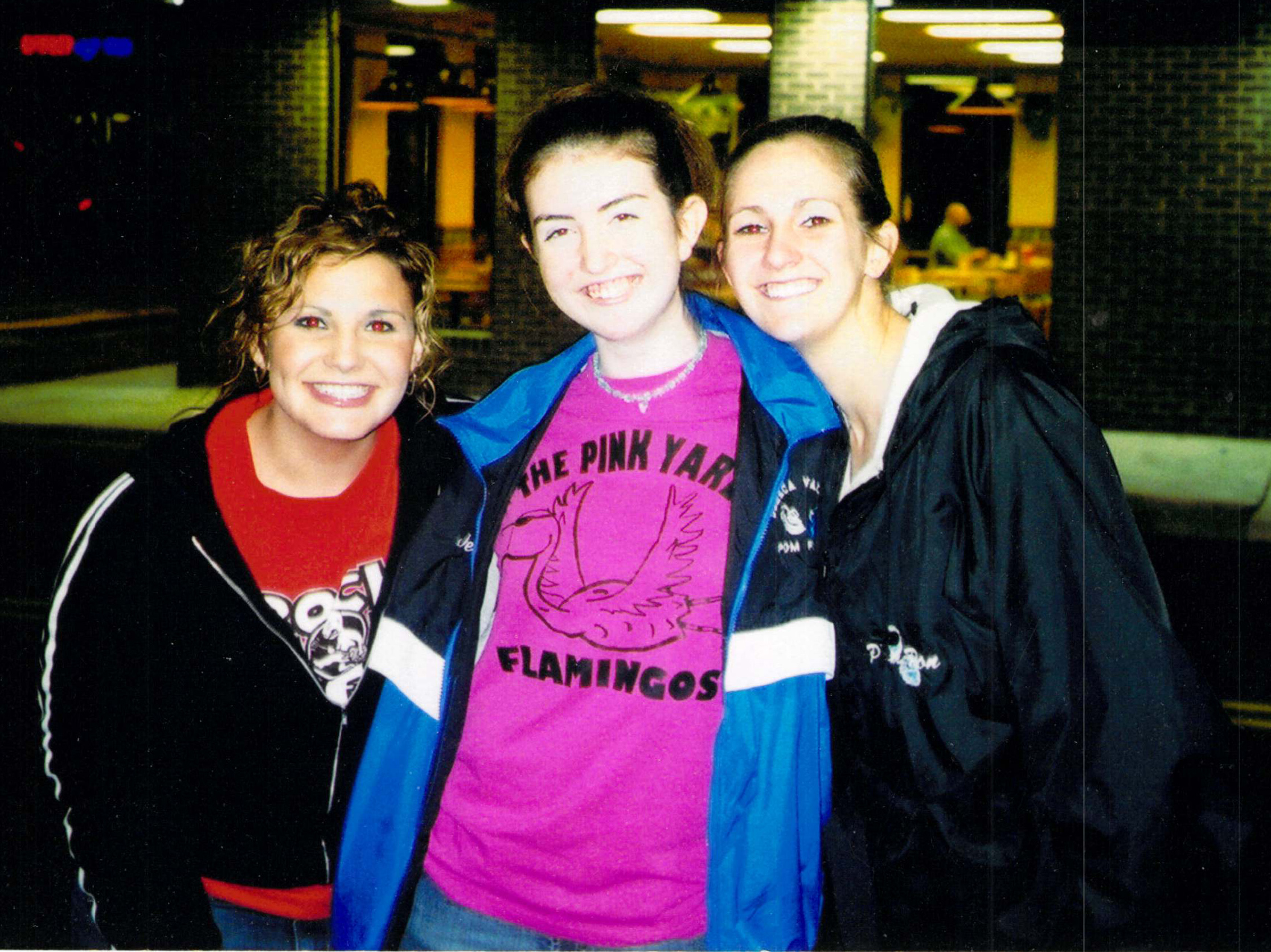 This is right before a Relient K show at Club Laga before it closed. We were in the very front row and Dave smiled at Ashley (left in photo) with a toothpick in his mouth. It was a very exciting moment for high schoolers. I’ve seen Relient K live more than any other band and they’re still a go-to when I’m having a bad day. Confession: I actually hated Relient K originally, but they won me over. I would still totally date Matt Theissen, who I like to think of as the blonde Adam Brody.

5. The Killers – Hot Fuss
Favorite Song: All These Things That I’ve Done 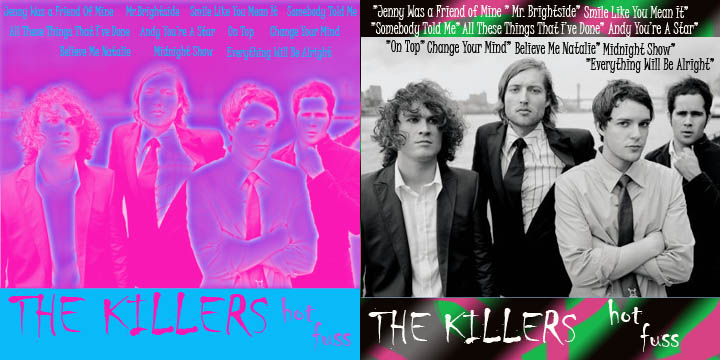 This album came out my senior year of high school and my bestie Shan and I used to listen to it when she was tutoring me in AP Calc. I owe all those C’s I got to her 💜. A friend of mine recently made a post on Facebook that said, “Mr. Brightside by The Killers is the best rock n roll song of this millennium. Fight me.” and I can’t say that I disagree too much. This album is still so so so good. Walk the Moon covered “All These Things That I’ve Done” on their most recent tour and I lost my fucking mind. (Seriously do yourself a favor and watch it here.) I really think they should have considered using my expert level album art…

6. Jesse McCartney – Beautiful Soul
Favorite Song: Get Your Shine On 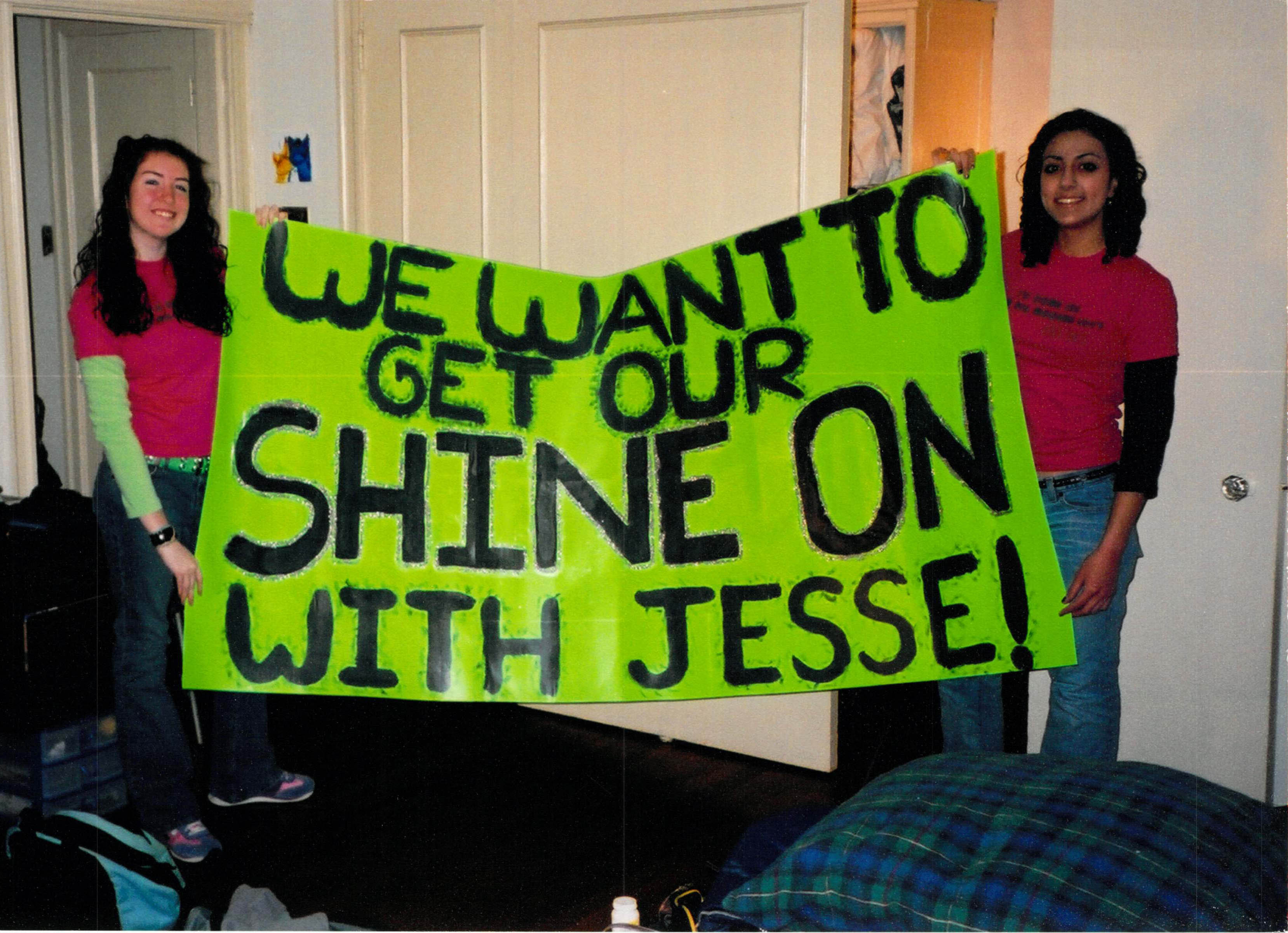 Senior year of high school my bestie, Ida, and I were OBSESSED with Jesse McCartney.  My dad took us to NYC when Jesse McCartney was on TRL and we stood outside with this poster we made out of 4 poster boards taped together. It was February and cold AF, but we laminated our poster and everyone was jealous of us because their posters were ripping.We were in the same graphic design class together and every project was based on JMAC. The shirts we’re wearing we made in that class. They say “I’d Come See Your Big Modern Loft Any Day” and they are based on this shirt that JMAC wore. I also dabbled in some really sweet photoshop in our graphic design class like this work of art: 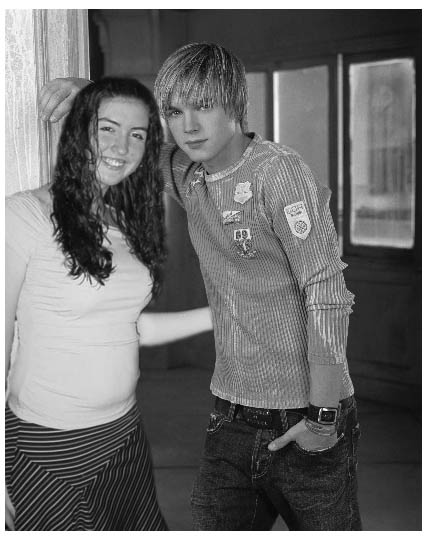 7. Justin Timberlake – Justified
Favorite Song: Like I Love You 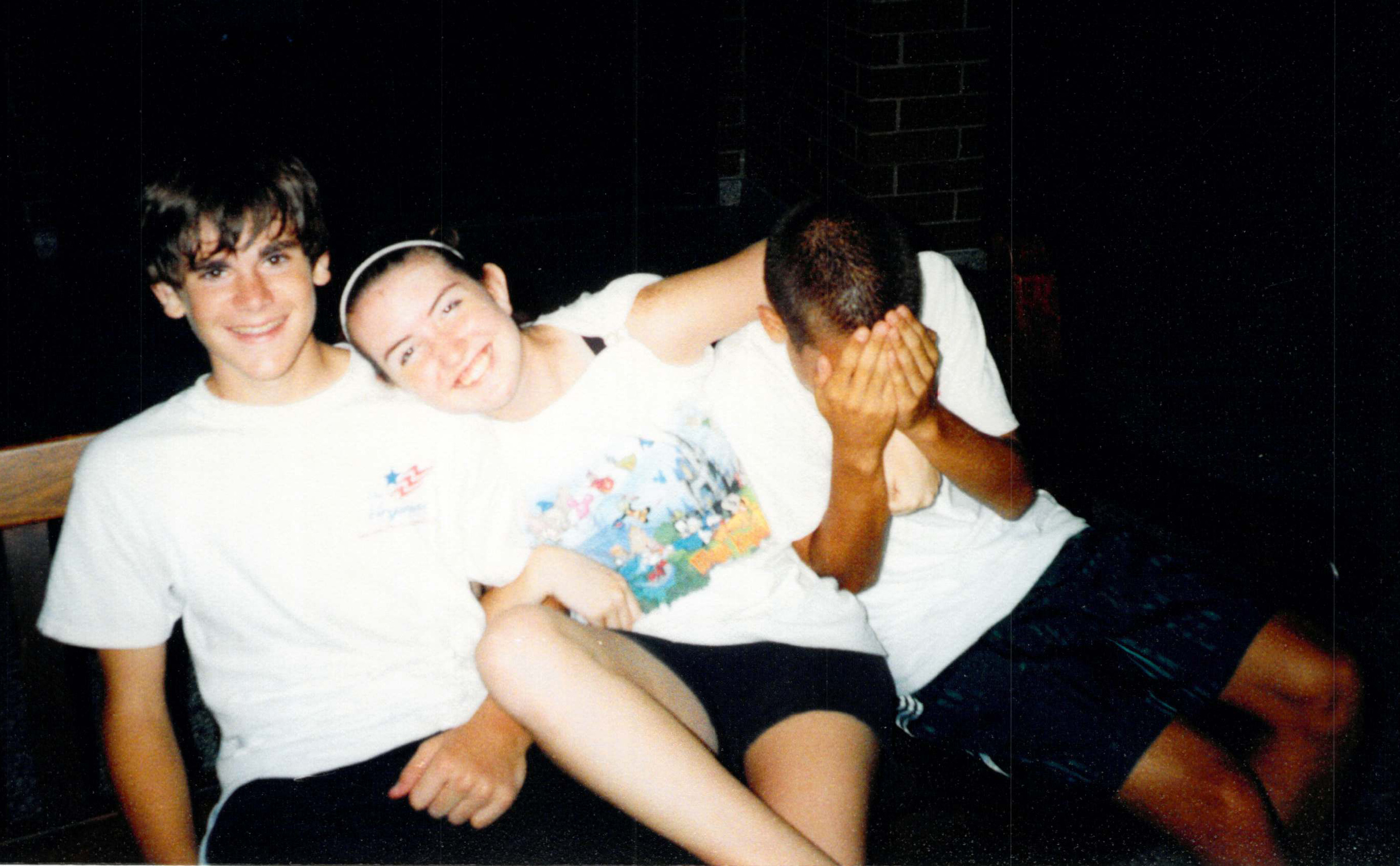 Obviously Justin Timberlake was my favorite member of *NSYNC so his solo album was an instant favorite. I went to the Justified Stripped tour featuring Justin and Christina Aguilera during her DRRRRTY XTINA phase and it was amazing! I remember driving to the movies to see The Ring and I made sure to have this CD in the car. I only had my permit so my dad was present along with my friends and crush, that boyband haired soccer player pictured #noshame. For the record my crush got really scared during The Ring and held my best friends hand instead of mine. It’s fine.

8. Simple Plan – No Pads, No Helmets… Just Balls
Favorite Song: I’d Do Anything 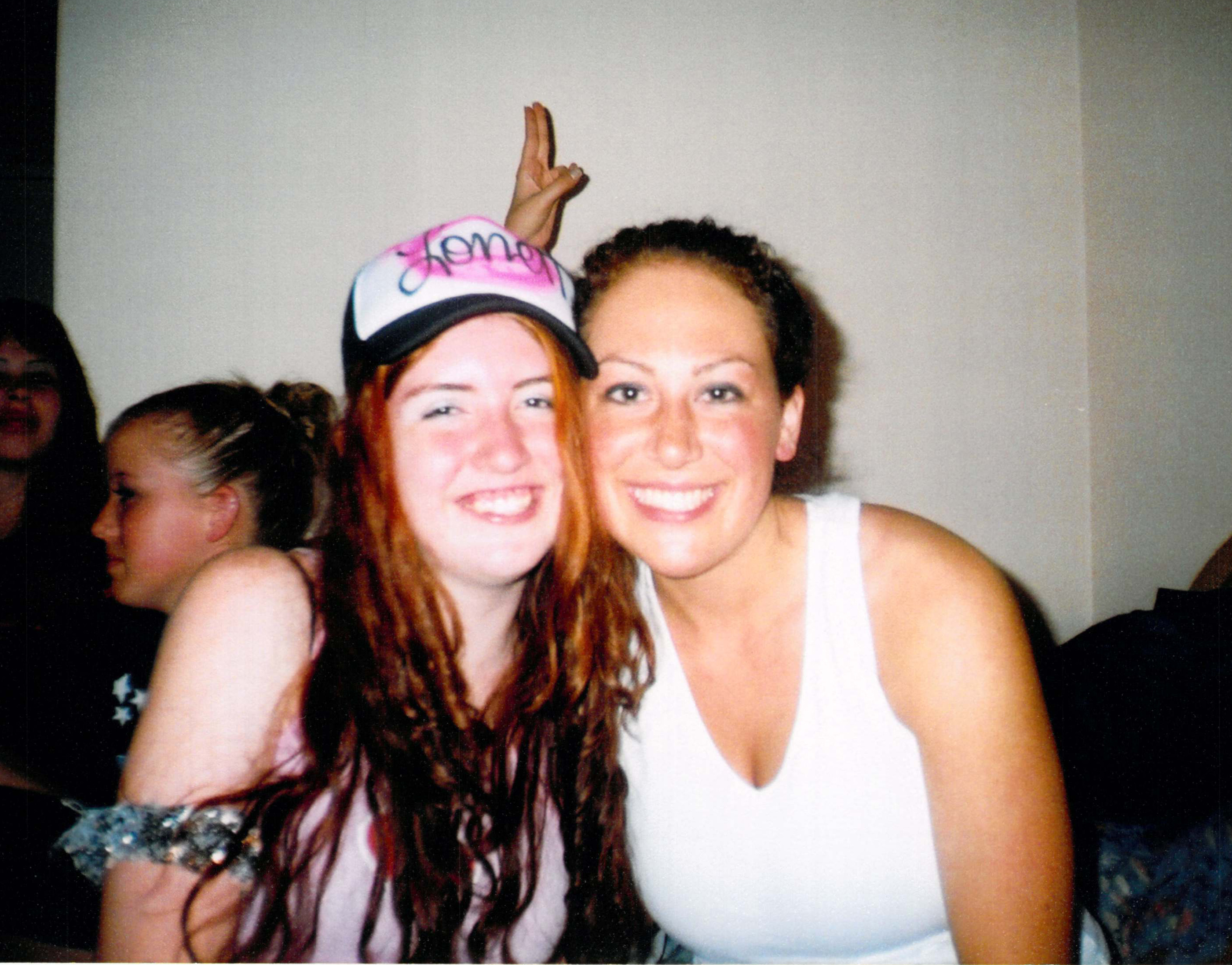 This album was so perfect for my teenage angst. There’s no one who knows the struggle of high schoolers like a bunch of Canadian early 20-somethings. We listened to so much of this album on band trips or in the car on the way to practice. Many songs from this album were AOL away messages and made it on mixed CDs when I was feeling sad about boys, which was always.  Simple Plan was also featured in the Mary Kate and Ashley masterpiece, New York Minute, which I was very into and currently own on DVD. 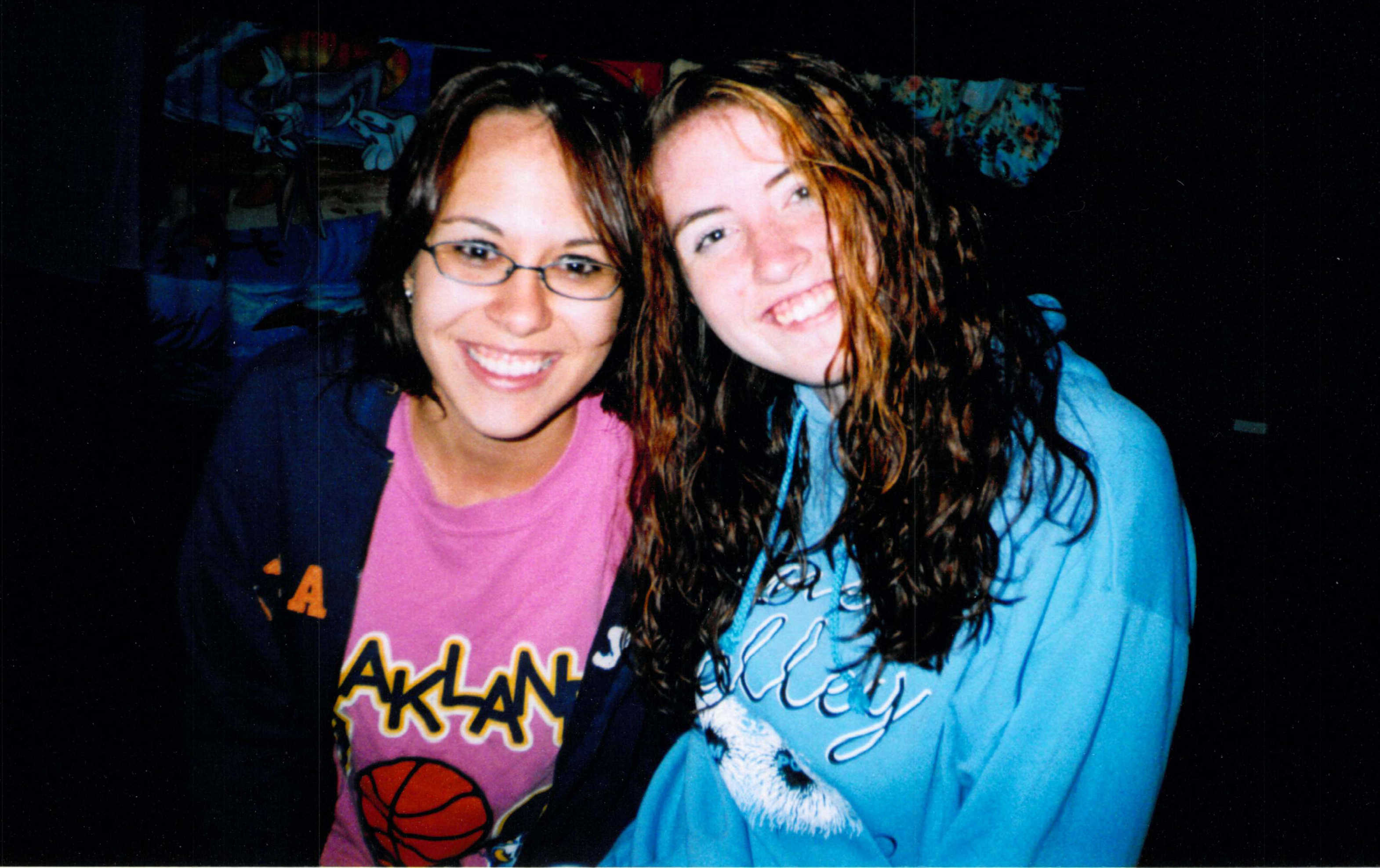 This was another album I used to listen to with Shan. “Get Me Outta Here” was basically our anthem for senior year. We were sooooo over high school and all the bullshit. Because, like, finding a date to prom is fucking exhausting.

10. Skye Sweetnam – Noise from the Basement
Favorite Song: Tangled Up In Me / Hypocrite 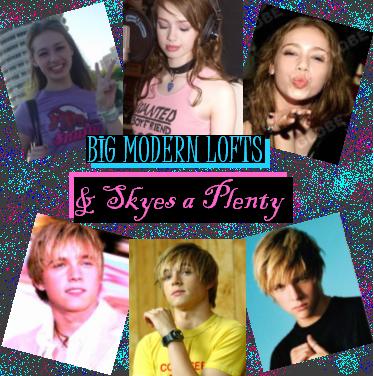 Here’s some more album art I created. This was a Skye Sweetnam + Jesse McCartney mashup. I honestly can’t tell if I made this in photoshop or MS paint which feels equally problematic and amazing. Skye Sweetnam was so much girl power and I love it. She was rebellious, but approachable. I really identified with her lyrics like, “Nerd, geek, super freak I’m a movie of the week.” 😂 This album was definitely about embracing who you are even if/especially if you’re different. Early 2000s “edgy” pop is the best.

Thank you internet trend for this nostalgia spiral that led me to this happy music-filled place. I’m a pretty big fan of Teen Jess and her musical tastes.